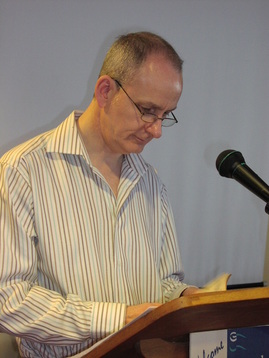 Rev Alan Wardlow
It was a chance to catch up on old friendships, make new ones, enjoy praise and worship and receive some excellent Bible teaching.

The 2007 Lay Witness conference was one of those experiences which will live for a very long time in the minds of those who were privileged to be there.  Numbers were unusually low but despite (or perhaps because of) this it was evident from the start that we were in for a very special time with God.

Our speaker was Rev Alan Wardlow from Dundrum, Dublin.  After being interviewed and sharing much of his personal story on the Friday evening Alan set the tone for what was to follow by looking at the cameo story of Mary and Martha.  He called us to see hurry and busyness as obstacles obstructing our walk with God and to embrace again the intuitive approach of a Mary who sat at the Master’s feet.  On Saturday Alan took as his theme “Early Days in the Early Church” exploring the role of the Holy Spirit in the lives of the early believers and in the formation of the New Testament Church.  We looked at the idea of waiting for the Spirit, of receiving the Spirit and of the difference the Holy Spirit makes to the Christian community.

Each session was preceded by a time of praise led by Allen McCartney and on Saturday by David Blevins.  Their thoughtfully prepared blend of scripture and music led us to heights of worship in which spontaneous contributions from the floor flowed naturally and freely and gave evidence of how the Spirit was moving in our midst.

Heather's Foot
​Some people came on Saturday for the day.  The programme facilitated this in that we had sessions in the morning and early afternoon.  This allowed day visitors to get the maximum content from the sessions and not have to wait around until later in the evening.  Instead of an evening session we had a light-hearted informal time of playing “Catch Phrase”.  It was good fun and modesty forbids me to mention which team won.  Unfortunately, as I had broken my foot several weeks earlier, I was unable to go forward for the prize presentation!
​The weekend came to a fitting conclusion on Sunday morning.  Alan preached on the blind beggar to whom Jesus addressed the question “What do you want me to do for you?”  This was followed by an extended time of prayer and ministry when many of us received special prayer for personal issues.  It was a time of knowing that we were on “holy ground”.  As the hymn writer put it

“Here we sought God that we might know His will

There we must do it, serve Him, seek Him still”

I have no doubt that as a result of this very special time of waiting on God, lives will have been changed in ways that will bring good in all sorts of ways for the Kingdom.